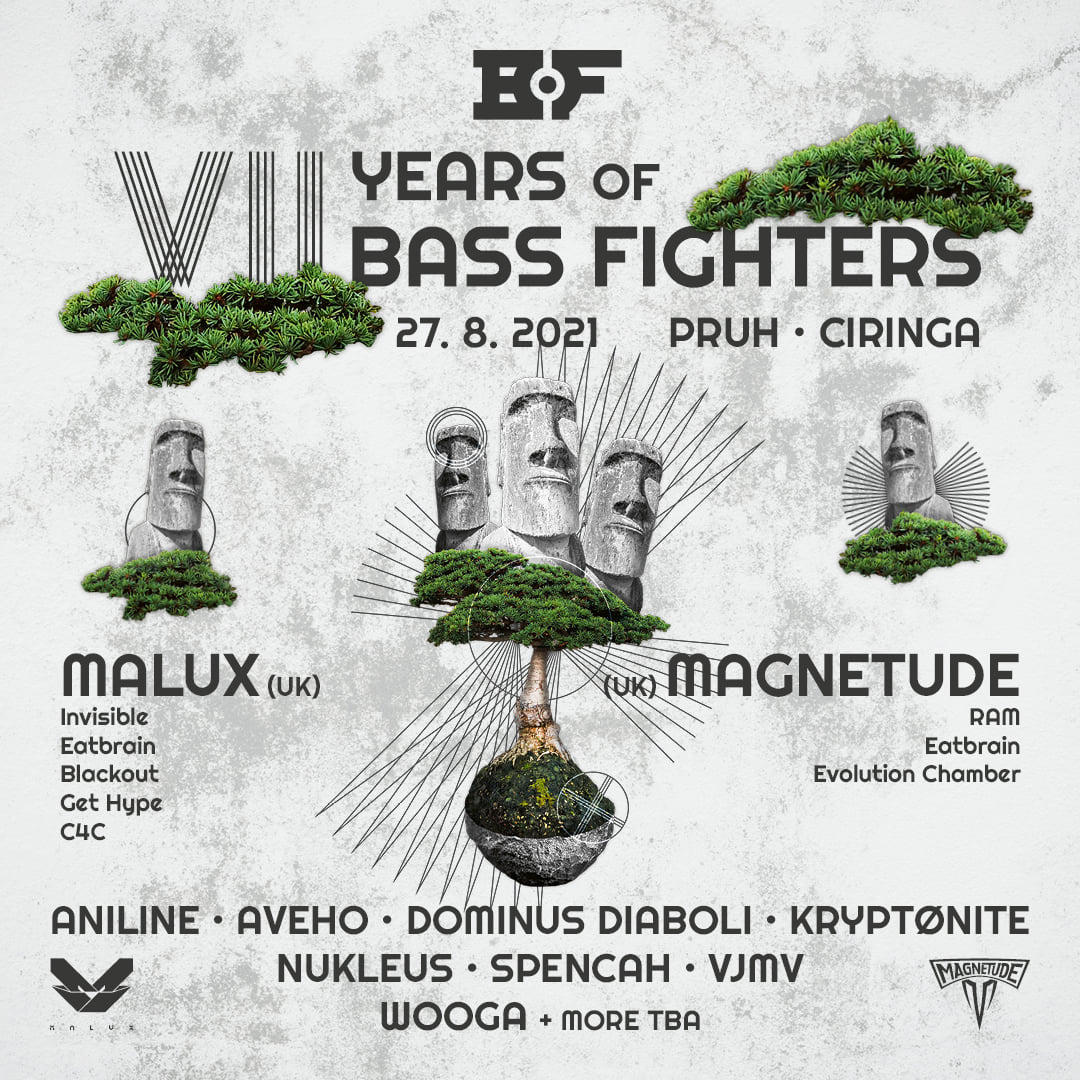 HEY #dnbfamily are you ready for this?!

hidden quarry in the forest

We are super excited to host international stars with big local support and to dance with you #dnbfamily. Gonna be an epic end of summer!!

TICKETS: https://bassfighters.com/shop/
Personal payment will be available between 18.8.2021 and 25.8.2021 at Eksperiment bar on Vetrinjska 8 in Maribor. For out international supporters we recommend payment via Paypal.
AGE: 18+
▔▔▔▔▔▔▔▔▔▔▔▔▔▔▔▔▔▔▔▔▔▔▔▔▔▔▔▔▔▔

MAGNETUDE
After destroying big stages on Pirate Station, Neuropunk Festival, Let it Roll we are finally bringing them to you at one of the most epic locations – Pruh. And it’s for the FIRST time in Slovenia!! Hope the quarry holds up!

The path of Magnetude was never a smooth one. The Anglo-Russian hybrid consisting of Rustam Mansurov (Rusty K) and James Peacock spent their formative years sharing music across the vast expanse of cyberspace; following a chance online meeting through their individual projects, it was their love for musically enriched drum & bass which drew them together and it was this passion and their strong musical backgrounds which saw their desire to collaborate.

Time passed, meaning Magnetude became less of an idea and more of a reality as they began writing tracks which incorporate a vast array of melodic intricacy, live orchestral and opera elements as well as story telling, and wasn’t long until they started to gain traction across worldwide stages in which they released on labels such as Lifted Music, Renegade Hardware and Eatbrain. However, the ingeniously sculpted and daringly forward thinking compositions they pieced together and released in that short period meant it was only natural for them to pique interest and sign with one of dance music’s most revered labels, Ram Records.

They started new label Evolution Chamber with Task Horizon and are putting out fresh and unique sound of drum’n’bass.

Though relatively a new project, their achievements speak for themselves and what they will accomplish next remains to be written.

MALUX is the dnb moniker of respected bass music pioneer SKOPE, with years of production experience behind him and a rich imagination, rendering him capable of exquisite audio manipulation and diverse funk aesthetics. Malux achieved a huge amount in the first year of the project’s existence. Covering an incredible amount of ground in very little time, and penetrating deep into the drum & bass sphere. He has a bright future ahead of him with releases for Invisible, Eatbrain, Blackout, C4C, Bad Taste, Program, Get Hype as well as headline appearances at Fabric, Boom Town, Let It Roll and Nu Forms festivals.
▔▔▔▔▔▔▔▔▔▔▔▔▔▔▔▔▔▔▔▔▔▔▔▔▔▔▔▔▔▔

The event will take place in accordance to the latest NIJZ recommendations. If you are not feeling well, please do not attend the festival.
+ Google Calendar+ iCal Export